My day started around 10 o’clock on this Lazy Sunday.

I crawled into my little sister’s bed because we always take turns doing that when we’re home. Waking up generally sucks, but doing it with another person helps take the edge off. This is how I feel about most “adult things” – yeah, I did just say that waking up before 10 am is an adult thing, because it is. Thank god there were donuts to make it even easier.

Another thing my sister Britt & I like to do is leave the house as much as we can. In fact, I think that’s how we got into hiking in the first place. Where else can you go for free when you have nothing planned ahead of time? Today we decided to go to the Riverbound Farm Sanctuary located in one of the corners of Cheshire, CT. It rained for the past few days, so we figured the water would be more wild than usual. And it’s one of the least intensive walks in town – we’re a little tired, okay?

Here are some pictures of the place that I’ve posted over the years:

As you can see, I’ve been here many times. You see that white house in the back of the outdoor classroom? Unbeknownst to me, it’s been a Quinnipiac Valley Audubon Society building all along. When we pulled up to the sanctuary today, there was a giant white sign saying “OPEN”. Apparently, today is Open Day. 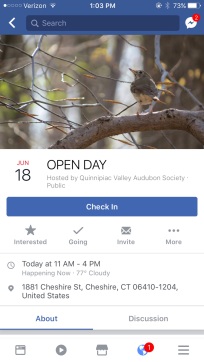 Sitting at a table were two members, maybe even leads, of the Society. They welcomed us, encouraged us to sign the guest book, and asked if we came here often. I explained how it’s one of our regular spots but the Audubon had always been a mystery. I proceeded to comment on the bridge that fell last year, the remodeled butterfly garden and the purple wildflowers that came and went. I felt like I had to prove how much I really like this place to these folks – they are the ones who take care of it, after all. We especially bonded over the mystery person who leaves walking sticks for others to enjoy.

I learned that the man is the person who rotates the signs in the trailhead that tell you the wildlife you should look out for depending on which month it is. The woman was well-versed in the speaker events that happen each month, as well as the bird-watching groups that operate in the spring. I was intrigued over everything they were saying, but in the back of my mind I knew I wouldn’t be around to enjoy what they will soon be offering. I’m about to move in like, a week…I think. Maybe Monday, maybe Tuesday, definitely soon.

After a little more talking, Britt and I began to explore the displays. 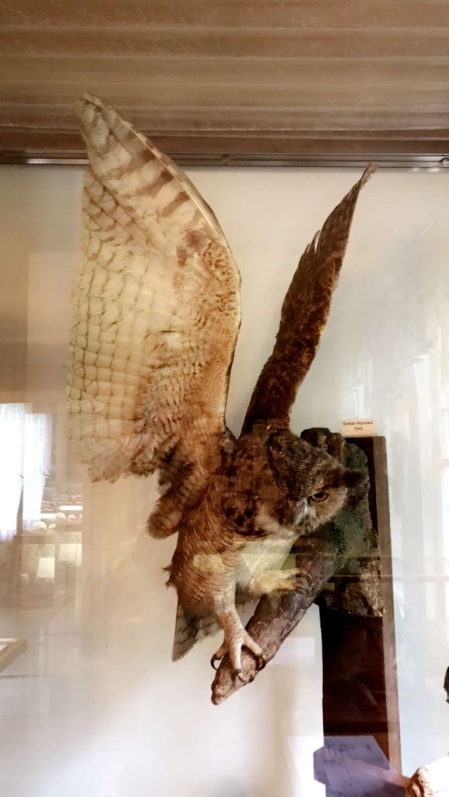 There’s so much more that I didn’t capture, and I hope all of you who are local to the area take a chance to visit the trails or headquarters so you can soak in the information, nature, or participate in the events to come. This place being open was a pleasant surprise, and it ended up making for a lovely experience before a peaceful stroll in the woods.

I hope you all have a happy and pleasant Father’s Day! I’m about to go stuff my face with my family.

Additional note: PLEASE pick up after yourselves, people. At my favorite bench I found a t-shirt, a giant Arby’s cup, wrappers, and multiple types of broken cups (glass, ceramic, etc.). Quit the shit, and don’t litter.

It’s February 3rd and today we dropped off ~80 lbs of our stuff with one of the people who’s helping us “figure it out.” Her name is Lindsay, she’s one of my cousin’s best friends, and she’s offered to help store a lot of the extra crap we brought that we totally regret packing into our suitcases. It feels good to have less things to be responsible for and keep track of. Shoutout to Lindsay & Stefan for making our lives a thousand times easier!

Our last night in Amsterdam creeped up on me. In case you haven’t noticed, I’ve been MIA because I’ve been doing a little extra housekeeping with myself and my belongings. Not only did I have to part ways with the items I didn’t want to say goodbye to in the first place, but we’re still planning the rest of this weird trip we’ve embarked on.

No, we’re not staying in Amsterdam like we first thought…for now. BUT, I am not going to ignore the option of coming back for grad school in September. It’s something I’ve been tossing around in my head, and I think missing Amsterdam in a few days will make me want to do it more. I’m not making any decisions yet…I still have some time before that.

Because this is our last night in Amsterdam before we leave our apartment in Amsterdam-Zuid, I’d like to catch you up on some other tourist activities we’ve done before I go on and spoil where we’re heading next.

I Ate a Pannekoek

This week, Shannon found out she has a friend who’s killin’ the travel life and his name is Kevin. He’s in Europe networking to build his career and knocking out a degree at the same time – shoutout to you Kevin for putting in work! What better situation to meet up with him than to get pancakes, right? 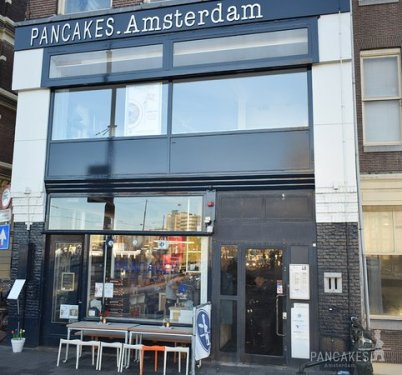 We found Pancakes.Amsterdam using iamsterdam.com, which has been a really good guide for us on this month-long experience. Pancakes is located right by Centraal Station and is ranked #2 on the Top 10 Pancake Restaurants in Amsterdam. The dish surprised me because I didn’t quite realize what a pannekoek was before we got there.

My idea of a pancake is the classic American flapjack stack…or even the teeny ones Shan got that day at Albert Cuypmarkt. Both are sweet and fluffy. As you can see from the picture below, Dutch pancakes are a lil different from what I’m used to.

Pannekoeks are thinner than an American pancake, thicker than a crêpe, and bigger than the plate. I would say it had a sort of hash brown consistency (though it’s not made of potatoes) and it came in sweet or savory. At Pancakes.Amsterdam, popular styles are with ham and cheese, bacon and cheese, ham and apple, or bacon and apple. The sweet and savory is not my favorite combo, so I stuck with something I felt comfortable with.

If you’re wondering, I just about ate the entire thing. #ShanVsFood

The Smallest House in Amsterdam

Thanks to a YouTube video with 15 of A’dam’s hidden gems, Shan O discovered the narrowest house in Amsterdam. Though there are a lot of slim buildings in this city, none compare to the little guy that holds the record…unless it’s not really the smallest house in Amsterdam but they bought a very clever trademark…hmm…🤔

Guess the dimensions of that thing.

Have a guestimate in mind?

Ready for the answer?

Wtf! How could somebody live there? Who thought that was a reasonable size for a home in the first place? It looked crazy cramped. I really wanted to see how uncomfortable it was to be inside of, but it was closed. ☹️ 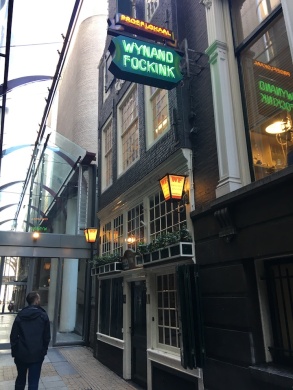 If you’re not familiar with Amsterdam or the Dutch, then your mind probably went to a dirty place. The rest of us know it’s a famous distillery that serves the oh-so famous Dutch gin aka genever.

“Genever is the juniper-flavored national and traditional liquor of the Netherlands and Belgium, from which gin evolved.”

I saw this place on Anthony Bourdain’s 24 Hours in Amsterdam: The Layover, in the YouTube video mentioned earlier, and had a few others suggest this tasting. Let’s be real, Bourdain alone makes it worthy of experiencing. 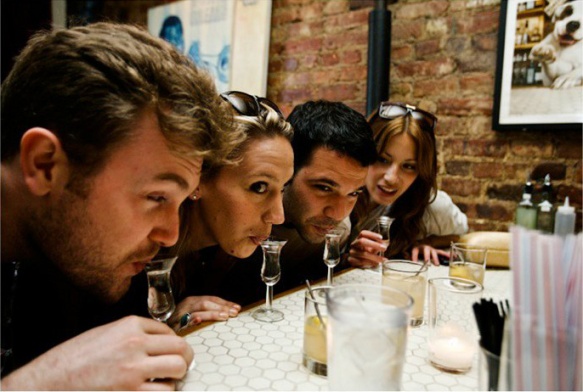 Here’s a cheesy stock photo of some young twenty-somethings drinking genever the proper way. It’s traditionally filled to the brim, so it’s custom to bend your butt over to sip genever to ensure it won’t spill when you pick it up – making the taste of strong alcohol last longer with baby sips – yum!

Shan, Kevin & I tasted two genevers: one that resembled vodka and one that had something fancy involving bourbon. We all decided on the bourbon. As I gave my full glass a tiny taste I tried to stay down a millisecond longer so I could get the repulsed expression off of my face before anyone saw. I genuinely don’t think it tasted bad, but my body reacts to all kinds of hard alcohol like I just ingested the nastiest thing in my life. Somehow I made it through the entire tiny cup.

A’dam All in All

Being able to immerse ourselves into Amsterdam to the degree that we have has been a mind-blowing experience. It’s given me space to have crazy fun, to learn more about myself, and to remember how extremely grateful I am for the opportunities I’ve been #blessed with.

Tying back to the fact that we left our stuff with a friend in Amsterdam – we’re coming back for them! There are still some things on our to-do list (like Keukenhof) and I can’t wait to knock em off in late March/early April before we leave the Schengen Area.

At 4 o’clock in the morning we’re parting ways with Kevin and Amsterdam, and we’re leaving for the beautiful city of Roma.

For the reasons we loved Amsterdam! It’s rich with history, culture, and places to be discovered. Beginning the moment we arrive, I’ll try my best to share our adventures in Italy with you.

And if you’re wondering why there aren’t more pictures from me/my phone, it’s because it got taken at a nightclub in Rembrandtplein. I’ll never see it again 😢 but I’ll try to be better with the actual camera from now on for more pics! 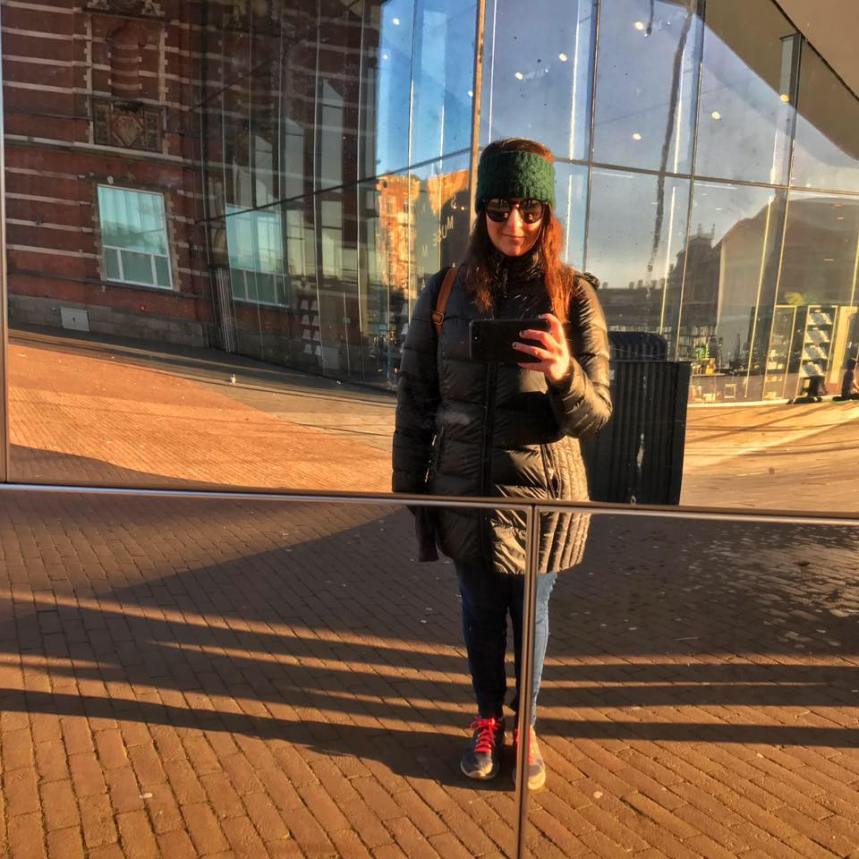